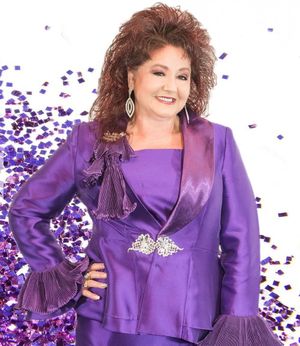 Brenda McClintock is a dynamic talent with a multiplicity of diverse qualities and experience. Her unique singing ability is both inspiring and heart-gripping. Singing since the age of 10, Brenda has ministered as a Psalmist, Worship Leader, Songwriter and Soloist in a variety of venues including TBN & TCT Television Networks. She has performed on the stages of Silver Dollar City, ICON Theatre (Branson, MO) & at the Ozark Empire Fair Grandstand.  She currently has a bi-weekly live broadcast "Ultimate Worship" that airs via Facebook.  She also has a weekly broadcast "Encounter His Presence" that airs on the Triumphant Christian Network and on ROKU.

Brenda is flexible enough to sing before hundreds, thousands or to a man diagnosed with an incurable disease, later to be completely restored and healed. That sensitivity to Christ and flexibility of flow makes her a treasured find in today's drive-by society. Indoors or outdoors, sanctuary or mall, tent crusades or television, Brenda brings forth a strong passionate flow with a deep pursuit of the Most High.

Her influences include Karen Wheaton & Vicki Yohe`. Her singing and song writing has produced the CD releases of "My Praise", "Livin The Life", "Intimacy", & “Unleashed”.

With over 30 years of full-time ministry experience, Brenda has traveled and preached abroad.  She is a keynote speaker with a powerful prophetic flow that captivates her listeners.  Brenda is the founder of Woman to Woman Fellowship and the “Fully Endowed” Women’s Conference.  She is one of the lead singers in Eagle Nation Music.  They recently released their debut album titled "Glorious".